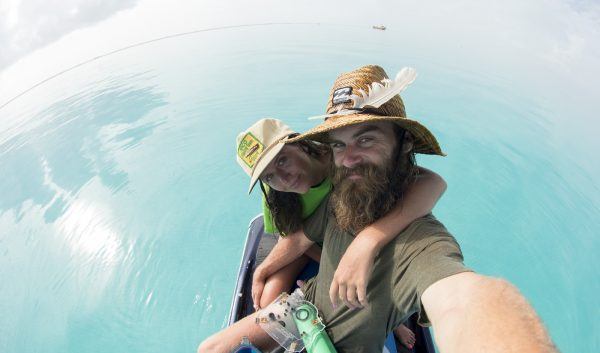 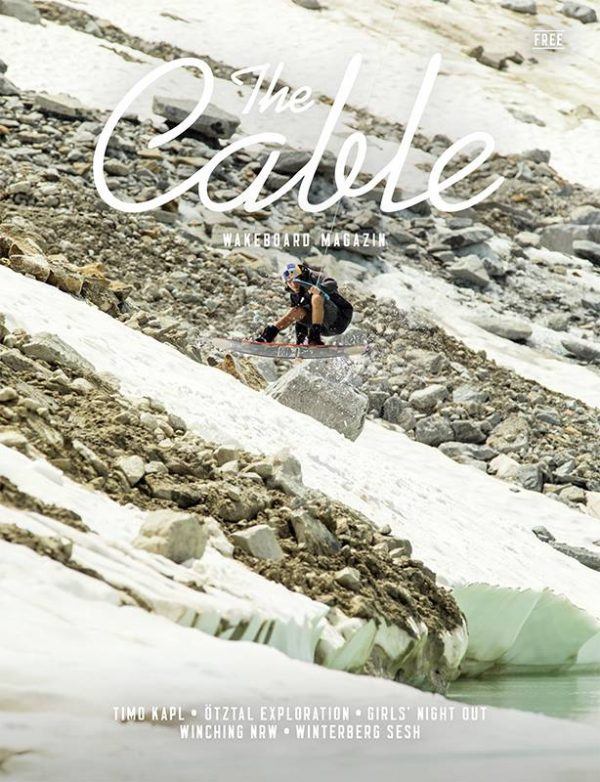 How everything started – with Bryan Soderlind 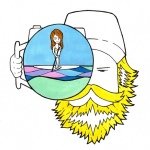 Talking about photographers in our community, Bryan Soderlinds name is definitely going to drop. Well deserved, as he is an influencing part of Wakeboarding for quite some time.

If a guy manages to submit content worth printing nearly an entire magazine, he must be a hell of a photographer. And yes, he is!

We already had an article about Bryan Soderlind in issue no. 11, but there where some open questions, which we now asked. Enjoy the chat with this friendly, funny and highly talented guy from the US.

Hi Bear. Well, doesn’t sound like an average nickname. How did you get it and when?

Bear: When I was 19 I met some guys that decided I looked a lot like the old pro golfer Jack Nicklaus who is nicknamed “The Golden Bear”. He’s the original and I was named after him. I don’t really look like him that much anymore with the beard but I could see the resemblance when I was younger.

Haha. I thought it was because of your blond beard.

Anyway, funny story and that is why we ask you to show us a portrait from that time. Here it is. And to compare it with the “original”, follow this Link –> Jack Nicklaus aka. The Golden Bear. 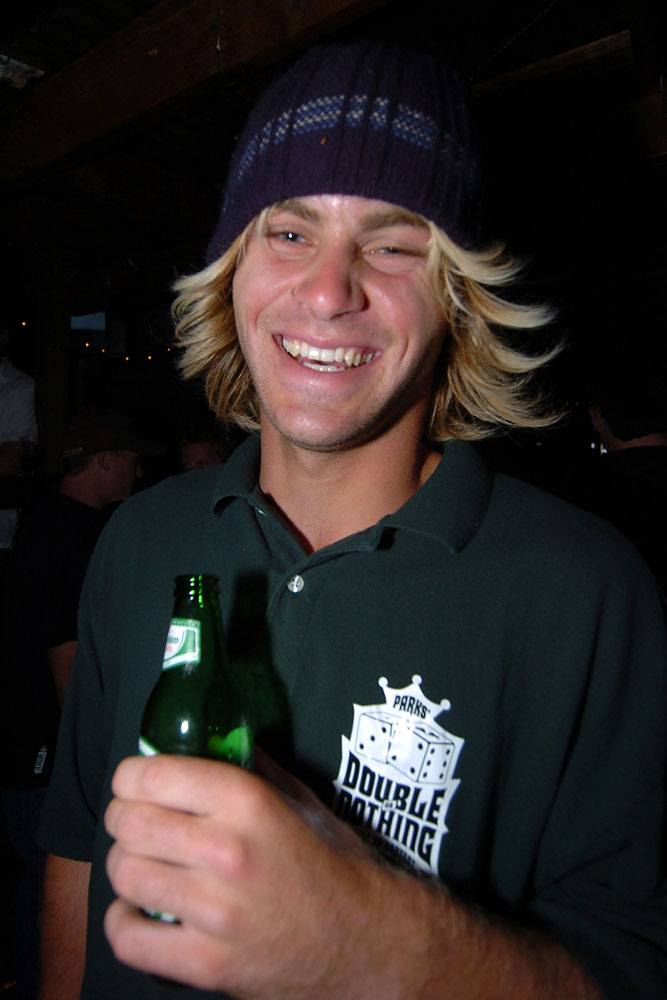 “As soon as I tried some “Kasspatz’n” I knew I was going to love the food the rest of the trip.“ – Bryan Soderlind 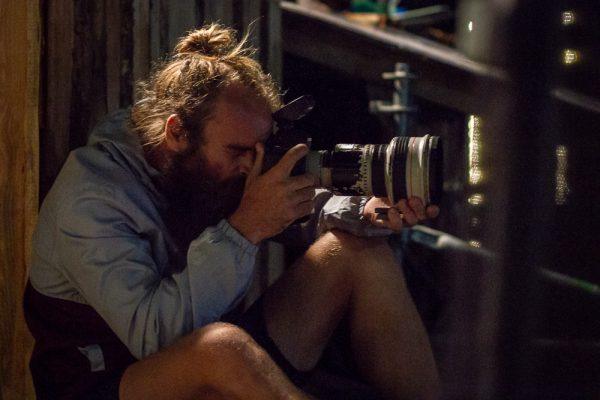 Always on fire whilst the Night Shooting at Munich

The trip for issue no. 11 was your first time in Germany? Did you like it? Give us some points that come to your mind, if you think about the trip.

Bear: The trip was my first time to Germany and I loved it. Munich was so impressive and modern. Everyone drives the best sporty station wagons! Then onto the countryside I just couldn’t get over the beautiful views and great weather and open countryside. As soon as I tried some “Kasspatz’n“ I knew I was going to love the food the rest of the trip. (Note: of course that traditional meal from the Allgäu had to be offered; it’s some kind of noodles and cheese with fried onion –> delicious) The air just felt fresh everywhere we went. I was always thinking about how enjoyable it was being outside. The coffee was incredible and the beer never gave me a hangover, always appreciative of that!

Good to know you loved it, and we did so, to have you here. First on the map was the girls night shoot. What did you expect and did everything end up the way you wanted it?

Bear: I wasn’t sure what to expect on the girls shoot, but was stoked knowing I had great lighting to work with, since we rented some serious firepower. Riding at night is always difficult though. Mix in riding a really large setup and the ladies first time riding it and you never know. The setup’s distance between land and water made shooting & lighting the whole thing pretty tough. The ladies killed it though. I was so pumped on how hard they all charged it. We went late into the night shooting too. It was surreal sitting out on a SUP board at 3am under Munich Tower in Olympiapark.

You gave everything and ended up in the water. Who impressed you most, whilst shooting at the Olympiapark?

Bear: All the girls rip way harder than I realized! I don’t think I had shot with any of them before and the setup was really scary for the guys when they were hitting it earlier that day. The girls absolutely blew me away!!!!!!

Hands down, you killed it as the girls did.

The action was so impressive, that there will be a “Pro Ladies“ category at Munich Mash 2019. For sure our shooting was a key reason, which ended in this decision. Here are some shots Bryan took at Munich during “Girls Night Out“ Shooting, that didn’t make it into print, because we had to select and some we wanted to publish again. 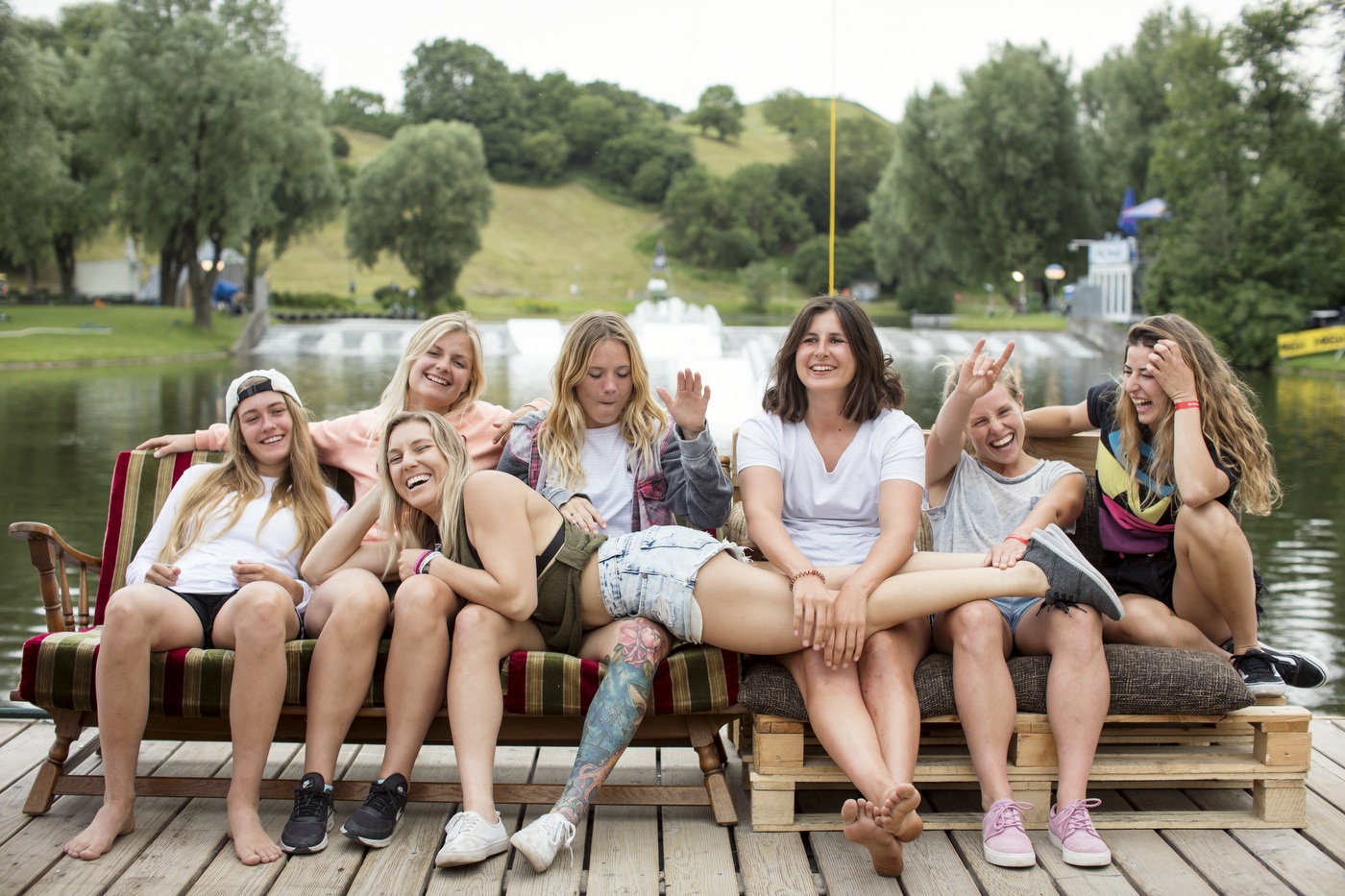 The Girls Night Out Crew 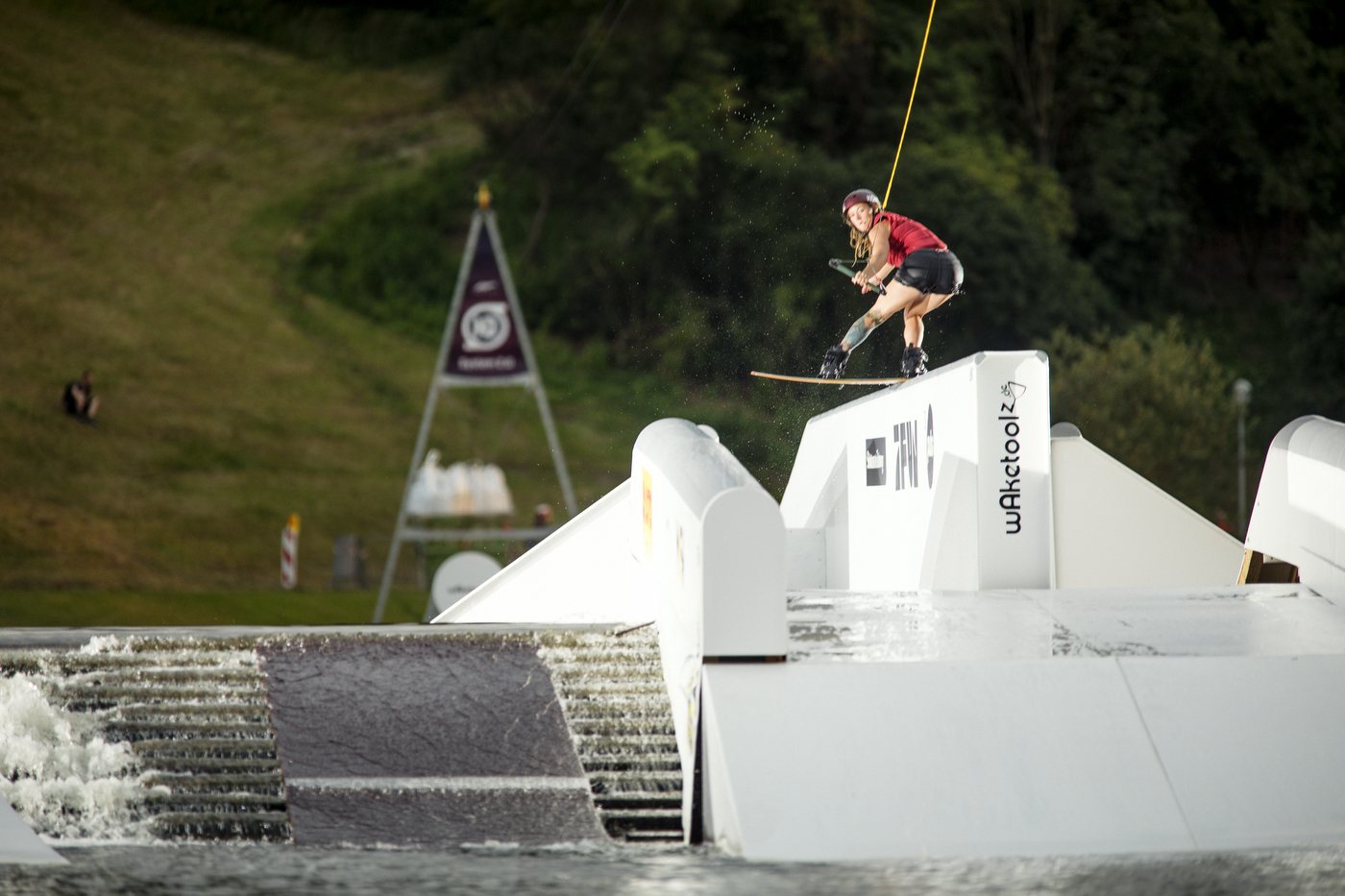 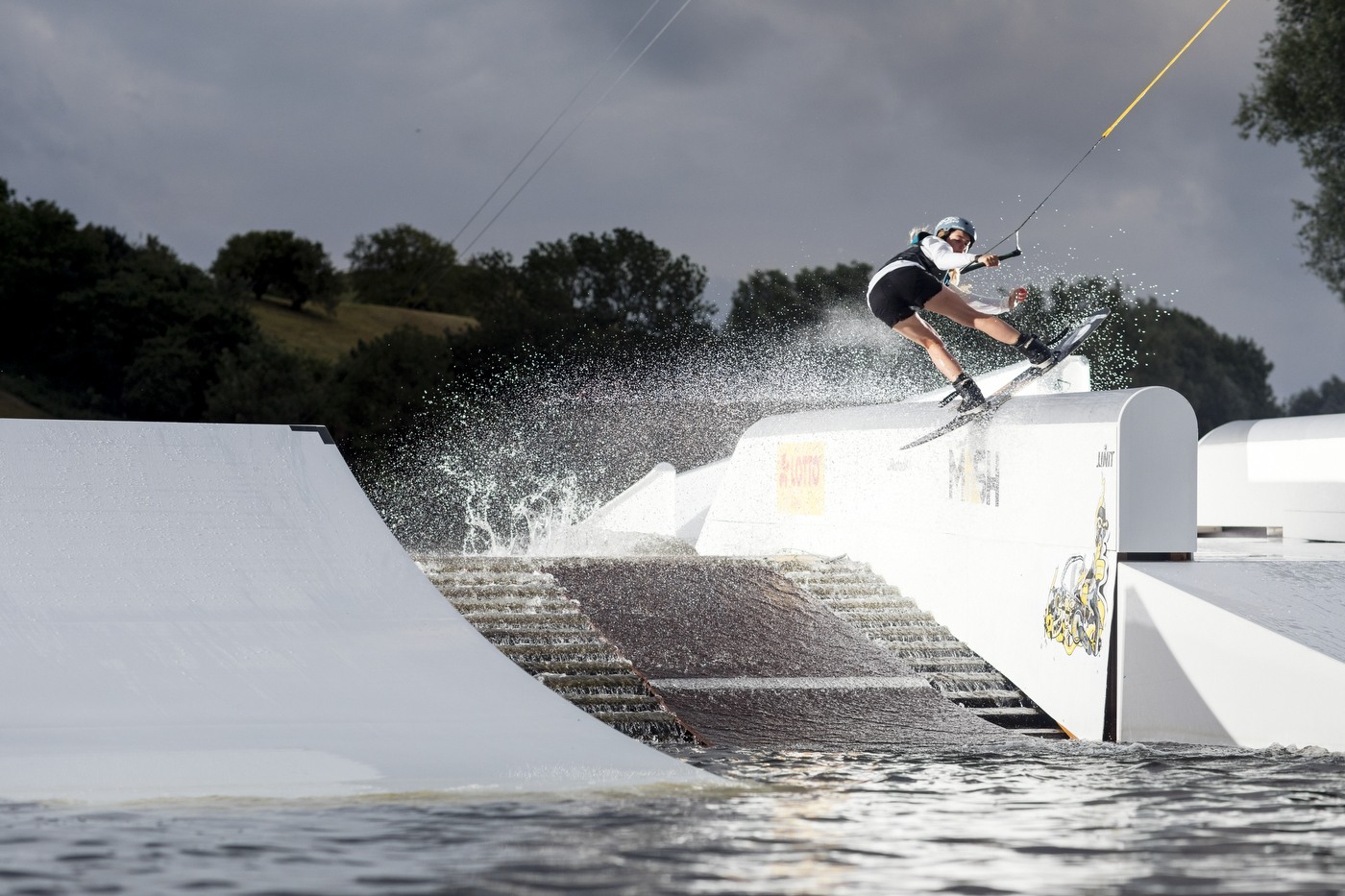 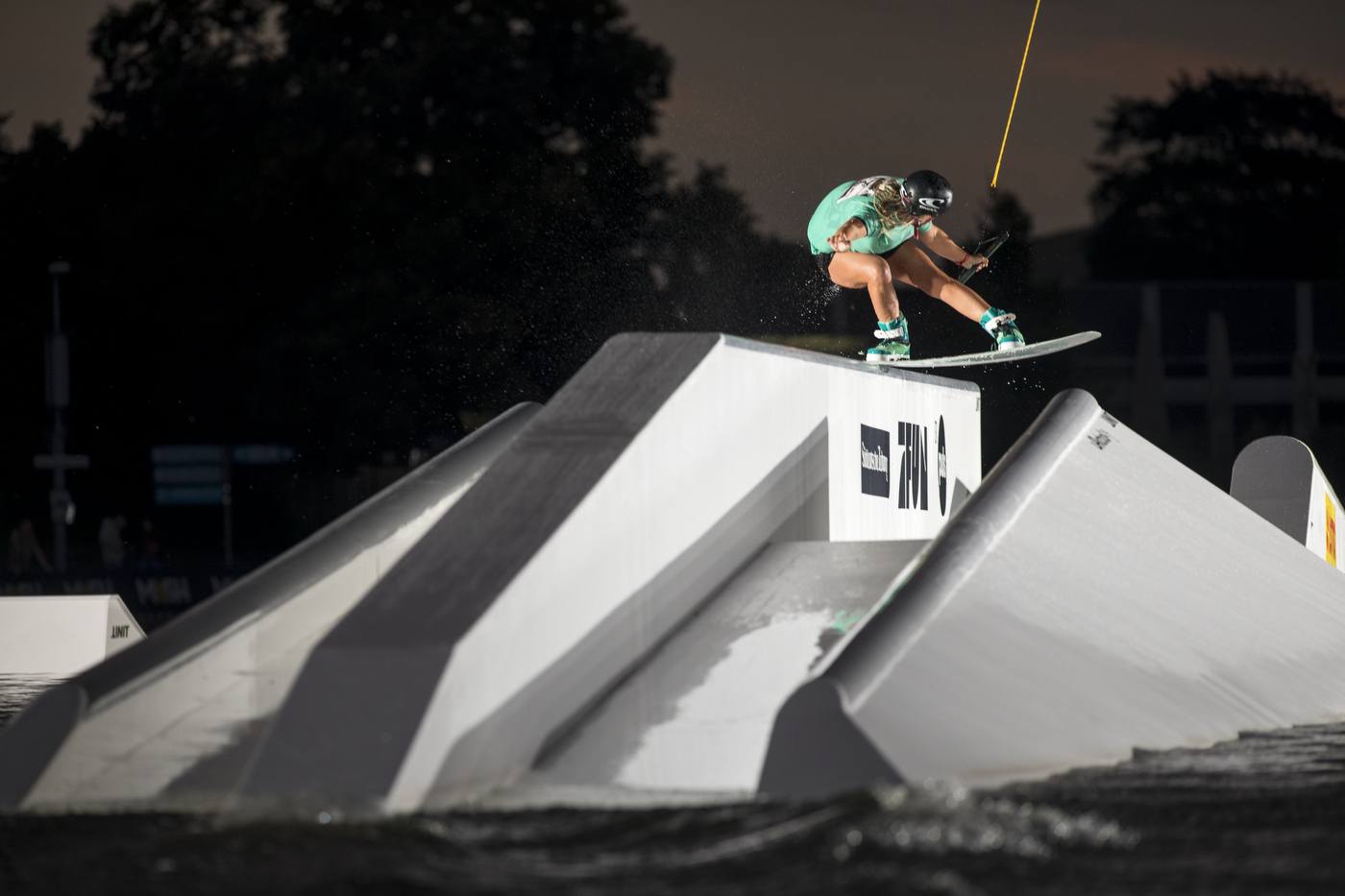 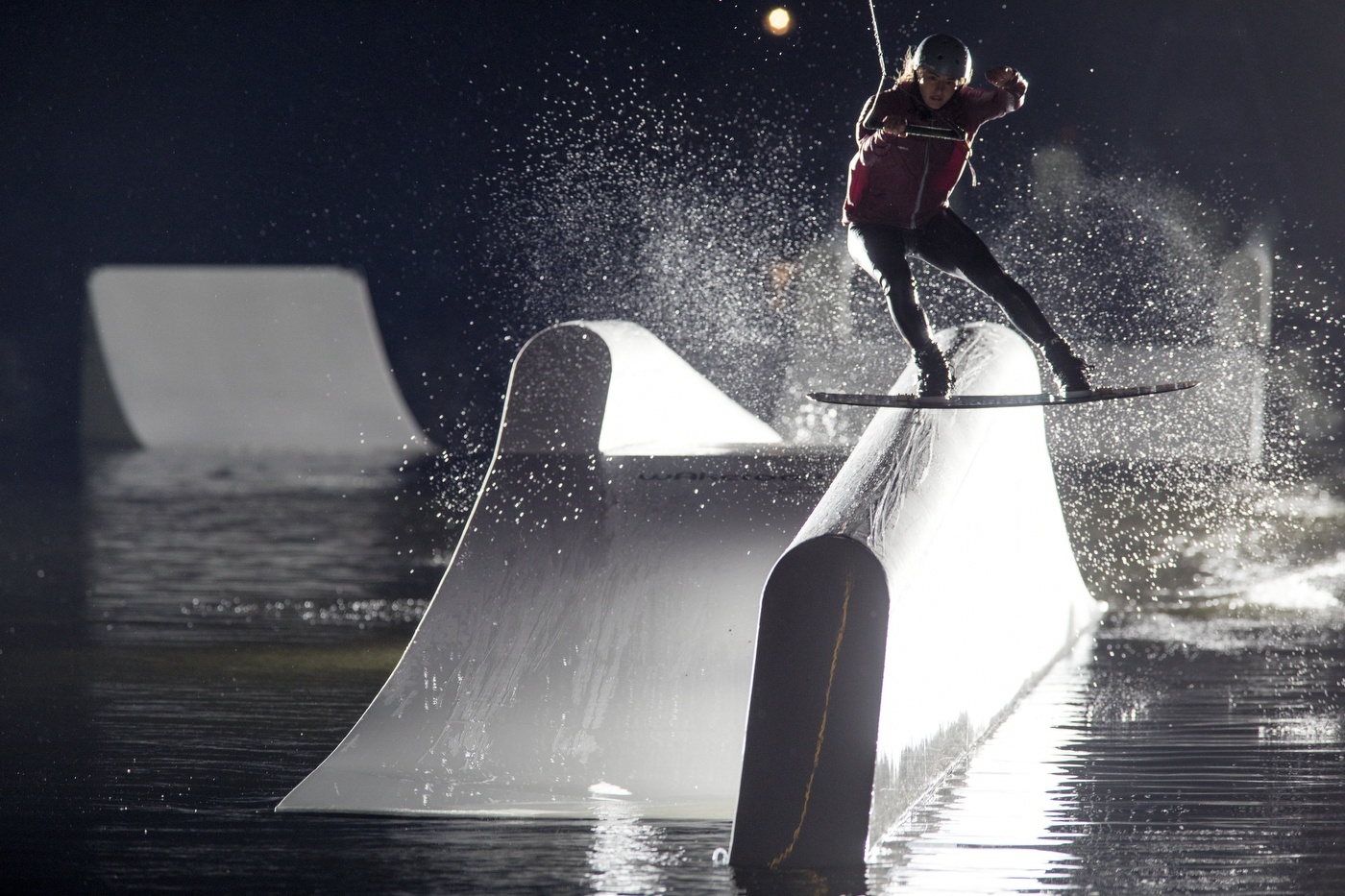 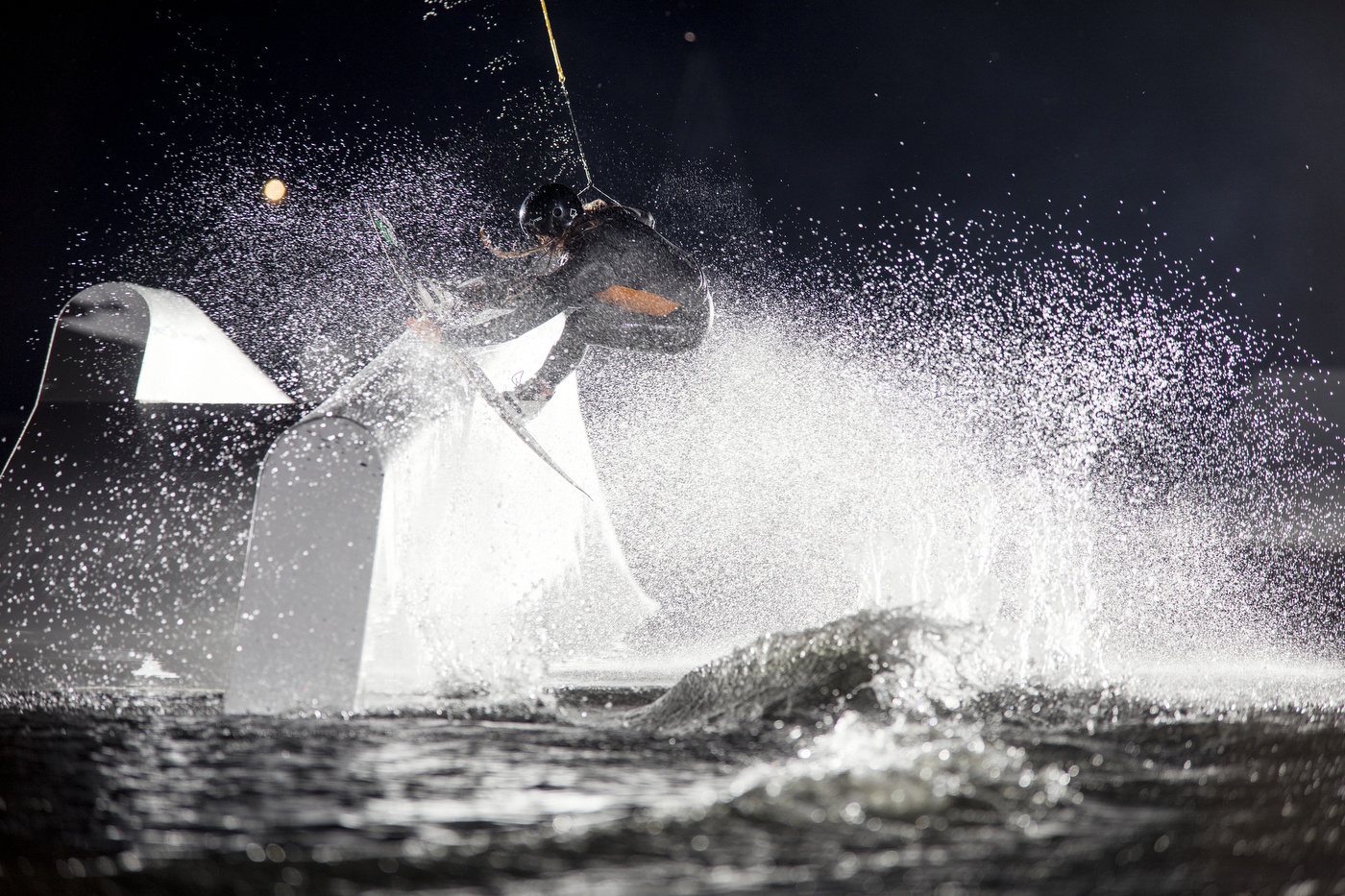 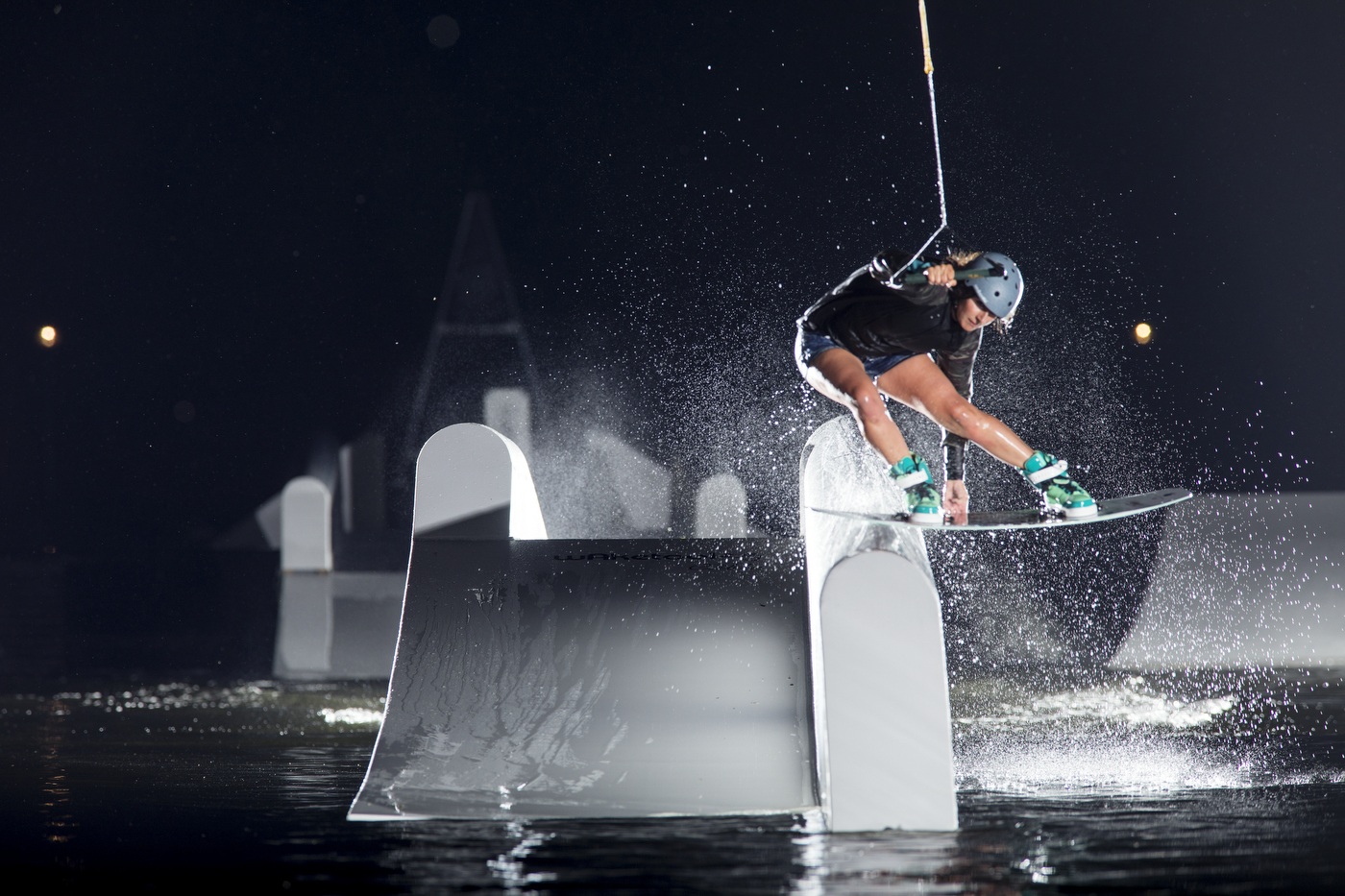 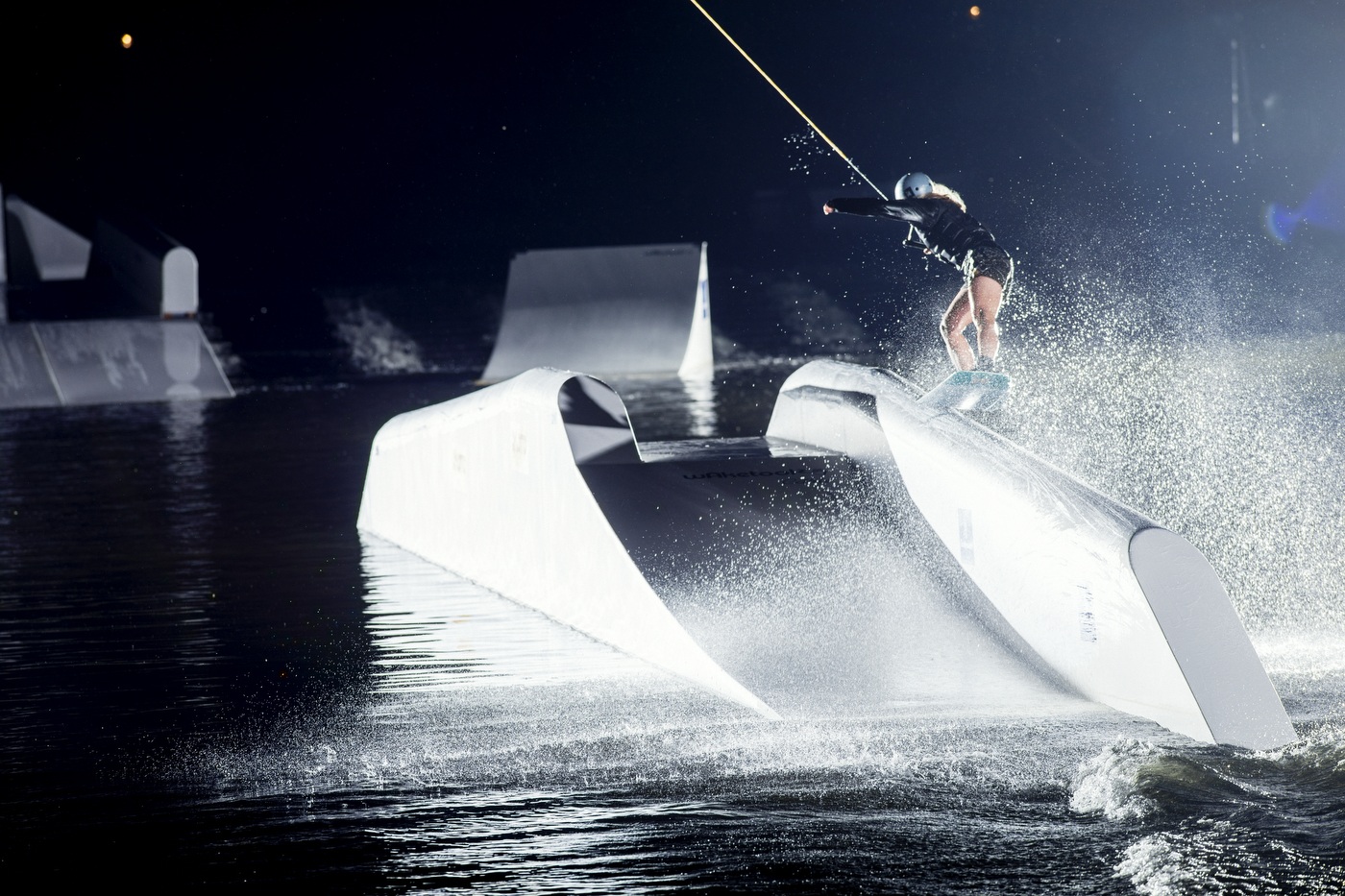 More about Bear tripping through Germany and Austria with us, follows on the next side.

Later on, you visited at least some German wake parks. What are your thoughts on those? What’s differents in comparison to the US?

Bear: I don’t really end up at any cable parks in the US besides Valdosta Wake Compound a few times. Places like Lake Ronix, Area 52 and Battle Falls are all privately owned 2.0 parks so I don’t see much of the “merry go round” and the public. The German parks were on another level. They were so well done and accommodating and places you could spend your whole day at. Coffee at an instant, great food, a scene of good cool riders, and all kinds of other activities.
Our couple of days staying at Turncable was incredible. It was too easy to just shoot and ride and eat and do it all over again without leaving to go anywhere else. Waketoolz Wakepark was amazing as well. Good vibes and tons of options for riding and shooting. Both parks got me re-stoked a little on wakeboarding. It’s awesome to see other riders and shoot new riders. Sometimes it’s only a handful of people I shoot in the states. 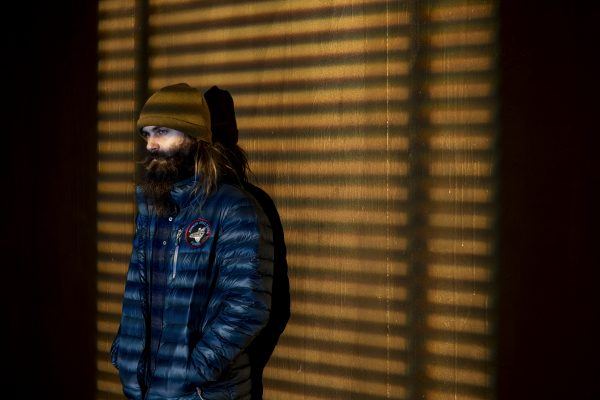 Bryan Soderlind aka. The Golden Bear

“The German parks were on another level. They were so well done and accommodating and places you could spend your whole day at.“ – Bryan Soderlind 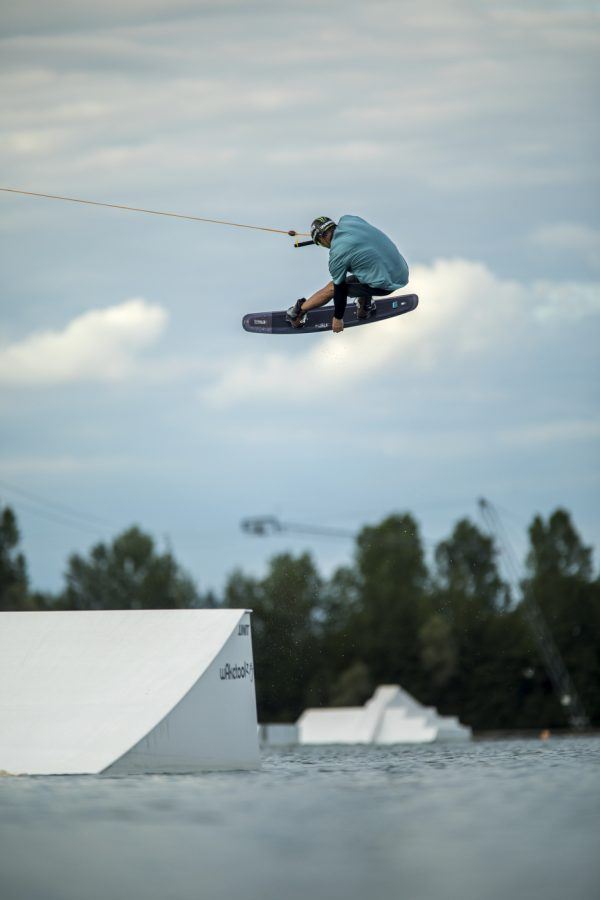 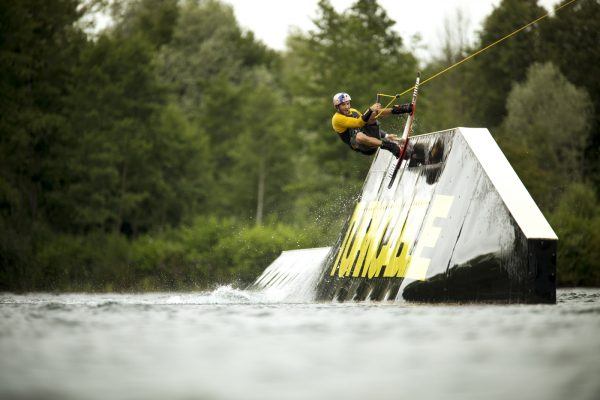 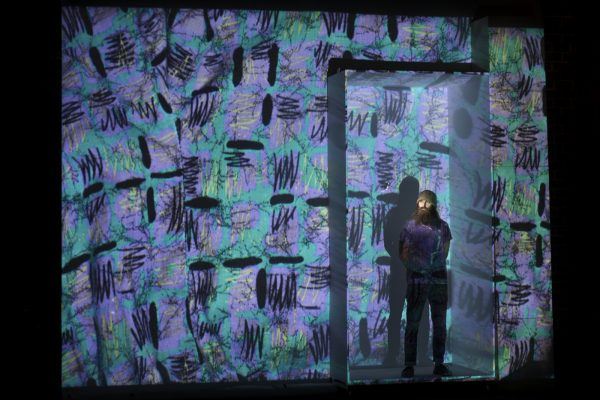 Glad you enjoyed your work over here. Finally you did a trip to Austria. Winching on top of the mountains isn’t an „every day job“. What were you and the crew struggling with? Are there any funny or weird stories that come to your mind?

Bear: The Ötzal trip was the most epic part of the trip. I’m used to being at sea level so I struggled a little with the altitude a few days up there but I think we all did. Everything was a mission, especially getting the winch into place and walking the rope back. It was always a long deal. We had the whole place to ourselves, so we were being pretty goofy up there at times. There was a couple times some large boulders came loose and would be rolling down the mountain and it was crazy being the only ones around to watch it. We always chilled a few beers in the water during the day for after we ride, perks of a glacial lake with freezing waters. Most times driving around, Dom (Hernler) and I were up front in the van and Timo (Kapl) and Blake (Bishop) were in the back cargo part, laying on all the gear. We definitely messed with them plenty, taking turns fast and cutting the light off when we did. Haha. (laughing)

Good times … yeah! In the end you earned not only the covershot, but a whole lot more pics in our mag. What is your favorite and why?

Bear: It’s always so hard to pic a favorite so I’ll go with the cover shot being my favorite. Dom really killed it coming up with that idea and I always think it’s cool when wakeboarding starts to look like something else. So many guys are great snowboarders, skaters and surfers and it’s fun to mix those sports in, cause it’s just some form of boarding sideways.

We love the cover as well. To round up the interview and in order to give those kids and photographers who are just starting with their cameras an advice: how did you get that good? Did you study photography and what is the ultimate thing to do, to get famous/successful?

Bear: I got into photography in my early 20’s without any background in it. I just started messing around with an old film camera and developed a passion for it. I was always shooting or reading about photography, trying to catch up.  I don’t think it’s about achieving anything more than just taking better pictures than the last time you took them. There’s a natural progression that takes time, so you will always be a student and learning.

“I don’t think it’s about achieving anything more than just taking better pictures than the last time you took them. There’s a natural progression that takes time so you will always be a student and learning.” – Bryan Soderlind

Well said. We don’t know how you could get any better, as we love your work, but we are looking forward to our future cooperations. Let’s see where we meet next and when you’ll be back in Europe for some great coffee and good time shooting. Thanks for your time, Bryan.

And for our readers. Here are some of our all time favorite shots printed in our mags within the last 5 years: