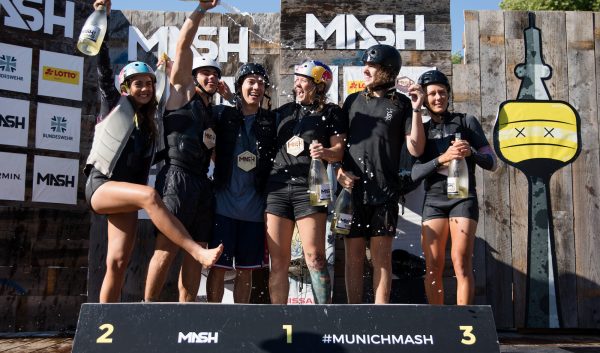 Wow. What a thrilling final. Nico von Lerchenfeld wins the Munich Mash 2022 and wins a big contest for the first time since Wake The Line 2011. In the women’s category there is no way around Anna Nikstad. The show in the finals was perfect. But let’s start from the beginning …

The Munich Mash in the Olympia Park stands for the perfect wakeboard location. The conditions of the park with its artificial slopes create a unique, artificial spectator grandstand and offer space for a huge audience that can be up close and personal. Rarely does a wakeboard event have so many spectators. With strong partners like System 2.0, who provided a constant pull and feature from UNIT Parktech the conditions were just right. We already reported about the setup, the participating and riders. Now let’s dive into the action. 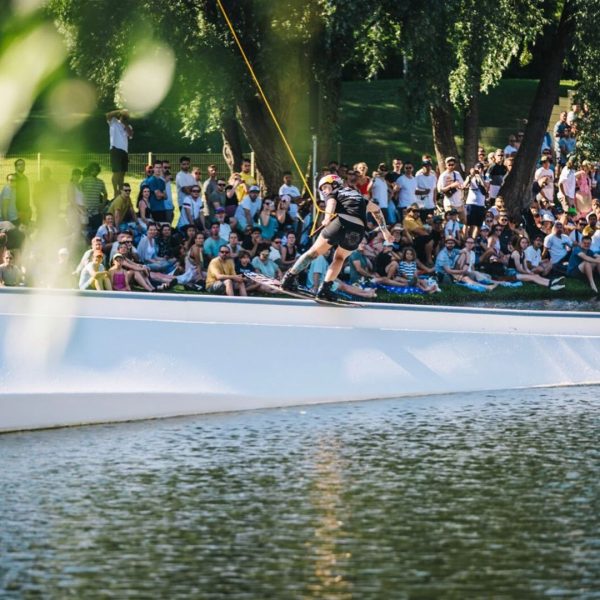 The first big surprise happened already on Saturday when Felix Georgii won against Liam Peacock. A razor-thin decision, which turned out in favor of Felix. Likewise Pedro Caldas, despite very strong riding (triple rail-to-rail hits), was eliminated already on Saturday. When Timo Kapl also crashed twice in the semi-final, several top favorites were out of the race. The men’s Super Final was won by Gavin Stuckey (USA), Loic Deschaux (FRA) and Nico von Lerchenfeld (GER). In the women’s race it was Julia Rick (GER), Claudia Pagnini (ITA) and Anna Nikstad (USA) who would split the podium among themselves.

Julia rode routinely, but could not keep up with the rail riding and took an early fall, which ended up with a clear 3rd place. It was a completely different story for Claudia Pagnini: many fans and riders were already confident in her win. Would she continue her streak and after LAO and WakeDuel also win in Munich? No. A crash in the second run at a usually so routined KGB off the kicker meant that she had to settle for 2nd place. So Anna Nikstad, with a very clean run and a lot of control deservedly won the final.

In the men’s event, the drama was up a notch. Gavin, at the tender age of 16, had already beaten Guenther Oka in the preliminary round and looked surprisingly consistent. But in the final it was over and he landed unclean on both kicker hits. A really convincing run was thus not possible. But also Nico von Lerchenfeld had to fight with these XXL kickers. In his first run, he crashed on his Switch Mute Crow Mobe 540, putting a huge load on his shoulders. 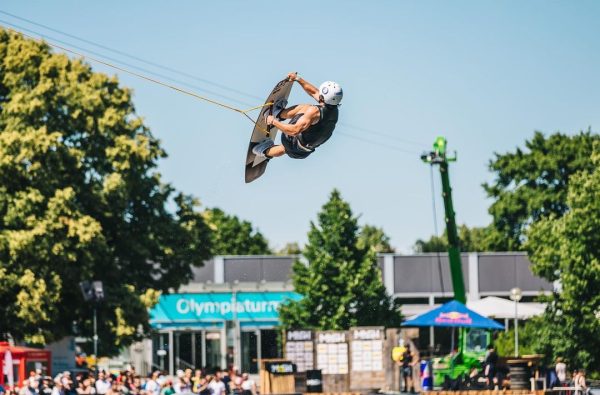 “I really went through an emotional rollercoaster during that event, so if I looked focused, it was probably me trying to deal with all that.” – Nico von Lerchenfeld 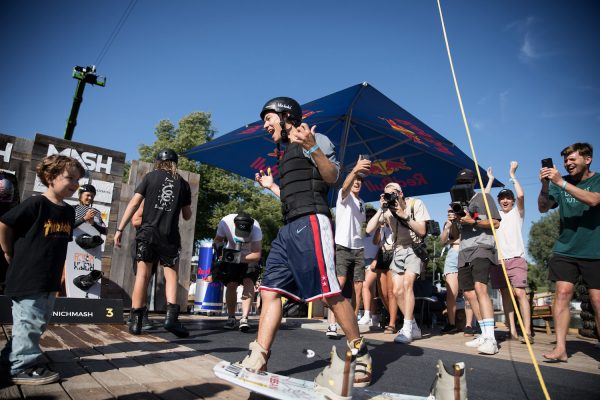 At this point, nothing had been decided yet. Another player was particularly convincing on this day: 18-year-old Frenchman Loic Deschaux. With an incredibly high Crail Moby Dick off the kicker, which will certainly remain in the memory of all spectators, he was in the lead for a while. But it was probably the small subtleties and not quite perfect rail hits that made the difference. In his second run, Loic crashed early on half way through the run at the Anna Nikstad rail. So now it was Nico von Lerchenfeld’s turn again as the last one. With a risky Tantrum Backlip 90 out on the Anne Freyer Signature Two, and the now perfectly stomped Mute Crow Mobe 540, he was on an absolute winning streak. He was aware of this and cheered briefly before continuing to ride with concentration and consistency. All further hits also sat almost perfectly. A relieved, proud and overjoyed Nico drove up the stage and was received by Loic, who already suspected what Nico had achieved. 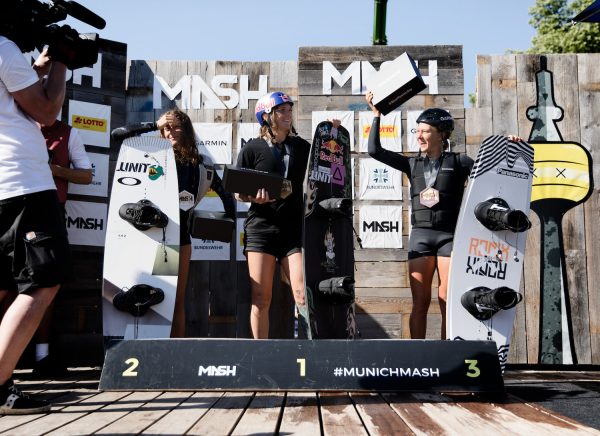 After a long wait for the result of the judges, the joy of all was huge. Nico had succeeded in winning in front of the Munich audience and in the presence of his entire family. First, his two sons and then wife Nane came on stage to congratulate him. Felix Georgii and John Dreiling didn’t take long either – this victory was completely deserved. Congratulations, Nico! Here you can watch the whole final again. Anna Nikstad’s winning run starts at 4:45:15, and Nico’s final run at 4:56:28.

Munich Mash 2022: Livestream, Rider and everything you need to know